Some fun news to report: I’m singing bass in a new quartet, cantus firmus, performing medieval and Renaissance music. Early music has not been the most frequently performed music in my life. But, I have thoroughly enjoyed it every time I did. This is why I jumped at the chance to be a part of this new ensemble.

Keven Zakresky put the group together after receiving a request from the Kimberley Medieval Festival. So, not only do I get to explore some really fascinating works, I also get a fun road trip. 😉

Each of us is a member of Pacifica Singers, which means we already know each other. This has definitely helped to make rehearsals smooth. We are already accustomed to blending with each other’s voices, and know each other’s personalities.  The quartet is made up of myself on bass, Michael Molnar on baritone, Daniel Marshall on 2nd tenor, and Kevin Zakresky on 1st tenor. Yes, I am using contemporary voice part names here. I don’t want to get into the confusion that is discussing the tenor in early music.  (so, in this piece the tenor is the lowest voice part, and this one it is the highest voice part, and here it’s the 2nd highest…) It was enough of a mind-warp in my music history lecture the first time. Though it was great listening to all the musical examples. Hmmm, maybe we should have a big discussion on “the tenor”.

But I digress on a silly tangent. When we had our first meeting to discuss the possibility of this group, we of course had to sing something. We didn’t have any music in front of us, so I pulled a barbershop tag out of my vast repertory of random tags. It was great to hear what the four of us sounded like locked nicely in tune with each other. It has been a constant source of joy in our rehearsals too. There’s nothing like the sound of 4 voices working together in perfect harmony. And there’s nothing like medieval and Renaissance music for some fun harmonies.

The name of the ensemble is kind of a funny story. While in the midst of talking about how we didn’t want a Latin name, somebody said something about cantus firmus, and well… Names are funny things that way sometimes.

I’m really looking forward to the culmination of our hard work in preparation for performing in Kimberley this July. We are also hoping to give a concert in Vancouver later in the summer. A highlight reel performance if you will, since we’ll be performing multiple sets at the festival. Stay tuned for more details about that potential concert of medieval and Renaissance music by cantus firmus. 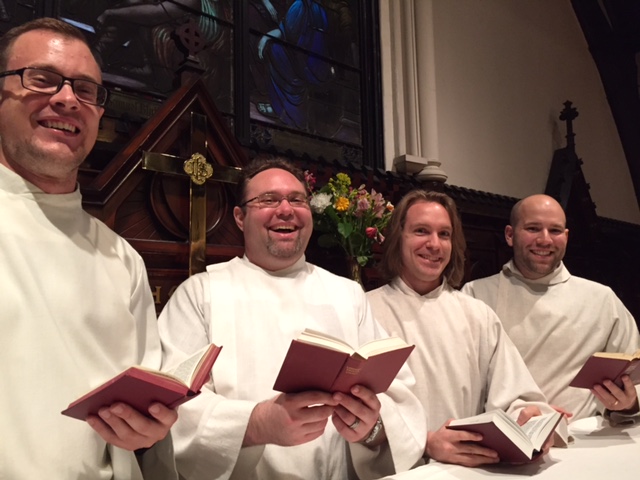